A selection of cultural attractions in the area of L’Estefana. Ask us for more options.

Target group: Everyone
This abbey was founded in 1138 by Saint Bernard’s followers. The roof is very nice, from a distance you see this the best. The abbey has a turbulent history. It is estimated that the abbey at its peak counted about 5,000 monks who either stayed in the abbey itself or in one of its numerous outbuildings within the region. After the French revolution, all monks had disappeared. The buildings were sold and served as quarries. A few years later the church was bought by the villagers to become a parish church. From that base, more and more has been restored to the allure of today. 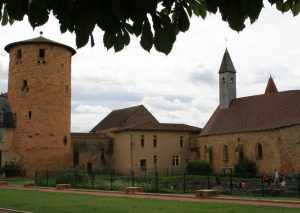 Target group: Everyone
The foundations of this abbey date from 872 and soon it fell under the management of Cluny so you will encounter many cluniac ornaments. The 12th century Grand Portail has withstood the rigors of the French revolution. There is a beautiful cloister in the abbey and in the adjoining rooms you can admire holy art. You can also go up to the ridge of the église abbatiale Saint-Fortuné. At the end is an exhibition with contemporary art. Wander around in the small, cozy center with half-timbered houses and narrow streets. 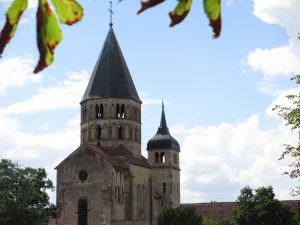 Target group: Everyone, horse lovers
Homeport of the Order of Cluny, founded in 910. For five centuries, until the construction of St. Peter’s in Rome, this abbey church was the largest religious building in Europe. Thanks to strict monastic discipline and charity, the order was imitated in large parts of Western Europe and became a pilgrimage site for pilgrims to Santiago de Compostela. Even if you do not have much with religion, Cluny is worth it. Go to the stud farm Haras National, founded in the time of Napoleon. Visit the stables and a horse show. Horse routes have been set out in the area. In the summer there are beautiful medieval shows here.

Target group: Everyone, especially children
One of the oldest castles in Burgundy, the first foundations of the square dungeon (22 meters high) are from the end of the 10th century. Residence of the famous Semur family and also the birthplace of Saint Hugues, abbot of Cluny. Rare example of a donjon from the Roman period. In addition to archaeological finds in and around the castle, there is a collection of posters about the French Revolution. You can visit the castle freely or with a guide. Childeren could dress up as princess or knigt. Walk on to the freely accessible Grenier au sel. In this ‘tax office’ the hated salt tax was saved, one of the reasons for the French Revolution.